Sacred WE as a Catalyst for Evolution 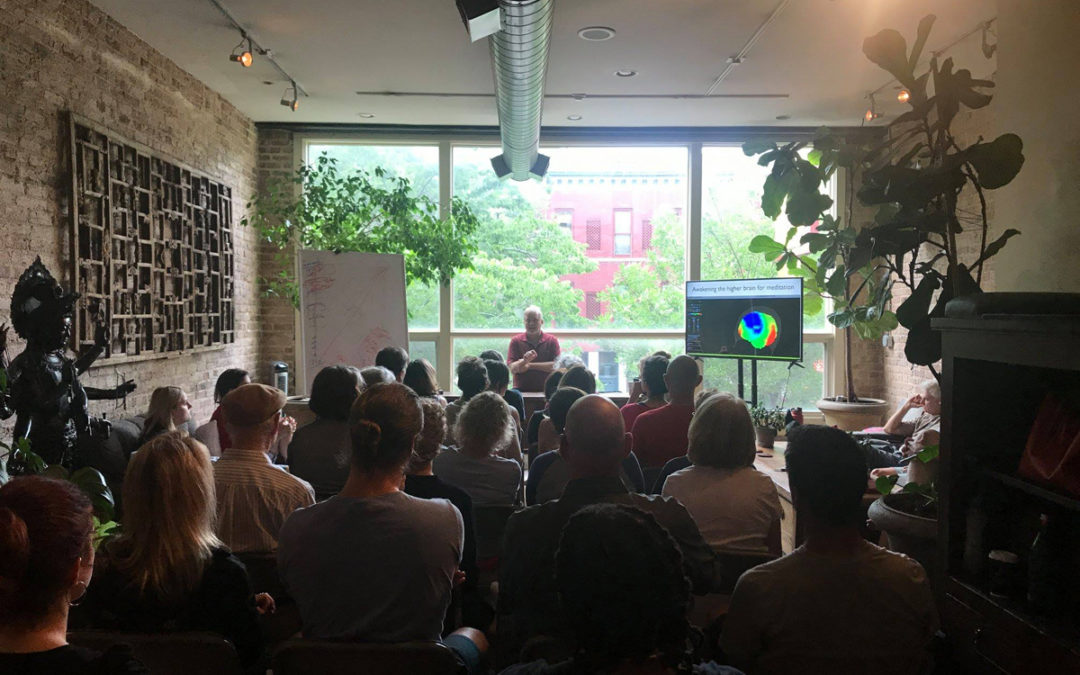 Over the weekend I hosted a retreat for 40 people in the Source Code Meditation World Headquarters in Chicago, IL. The depth of experience and the truth revealed quickly resolved (or at least extinguished) any personal drama that one arrived with. What remained were 40 brave souls exploring their full human potential. We discovered, in a weekend, what heaven on earth just might feel like.

Today I am contemplating a certain type of community as the catalyst for a New Human to rise and a new culture emerge.

Everyone at this retreat experienced activation of higher potential in their brains and awakened higher consciousness in their minds. What was most significant to me, however, was the depth of relationship that formed. By the second day of this two-day retreat, there were connections, conversations and deep mutual resonance that would have been rare even for lifelong friends or close family members… And yet, by the time this profound connection took hold, many of the attendees had only known each other for 24 hours. There is something special about this. How quickly could the world change if this depth of connection became normalized?

I want to be clear about the relationships that are forming in these retreats. It’s not just empathetic care and concern for each other, or becoming ‘friends’ in the usual sense of the word. It’s much more radical than that. There is a sense—that crosses individual boundaries—that the group is part of something invading and altering a fundamental dimension of reality and signaling a new way to be in the world.

What emerged over the weekend was the experience of one’s personal consciousness being transcended, and yet included within a newly emergent ‘being’ that IS the awakened group—a sacred WE. Once formed, the Sacred WE feels exponentially greater than the sum of its parts and takes on the characteristics of an awakened, living organism. Transcending and yet including the uniqueness of each individual, the felt sense of the Sacred WE was that of an ecstatic embrace by the source.

This weekend, those 40 souls in collective union sourced collective consciousness from the Godhead. God was felt to be looking through the eyes of the ‘WE as One’ as God experienced God in a way not possible through each individual separately. A new entity within the group emerged, and yet left the autonomy and agency of the individual intact. In fact, individuality was not only ‘in tact’ but also empowered.

Where does this empowerment come from?

As higher consciousness was enacted through the group dynamic, the energy of evolution was felt, animating every cell of one’s body. The energy of evolution—that same energy that thrust itself forward as the ‘Big Bang’ billions of years ago—surged through our bodies, metabolizing dormant evolutionary structures in each of our brains. Joy and confidence soared, creativity was unlocked and the empowerment that comes from knowing oneself as the leading edge of evolution, consumed the group.

Once you experience that, you are changed. You have touched spiritual consciousness, unleashed the evolutionary impulse into your personal physiology and found an underlying unity that holds even the most fragmented world together.

And then you go home. Here is the challenge.

This Sacred We Space cannot be experienced only a few days each year, at least not if we value our own evolution and want to see a new world emerge. Here is the thing not well known: ‘WE’ is fundamental to ‘YOU’.  Your own individual growth and evolution are dependent upon all the ’WE’s’ that ‘YOU’ are embedded within.

Integral meta-theory informs us there are four fundamental areas of relative reality: Mind, Body, Relationships and Environment. The Relationship and Environment dimensions are collectives, and these collectives impact the individual. Try as you might, you cannot escape the staggering consequences that the ‘We’ has on the ‘You’. Once you begin your evolutionary ascent, you are impacted by your personal relationships with family, friends, coworkers, etc., as well as by your home and work environments. But that’s not all…here’s where evolution gets dicey; there’s an even bigger issue within the Relationship (We) dimension of your life. Our dominant modern – postmodern ‘culture’ (the one giant relationship that we are all trapped within) is influencing every thought in our heads, and the systems and environment associated with it impact our every behavior. You as an individual are embedded within this dominant Culture/Environment dynamic. So what’s the big deal? If your personal stage of development is below the cultural norms, the culture pulls you up into it and helps you grow. That’s a real benefit of culture. However, what if you are growing beyond your culture? Now you have a problem. If the New Human rises beyond the dominant culture, that same gravitational pull drags you back down and stifles your growth. New Human evolution arrested.

There can be only one solution.

The Sacred We Space of the New Human cannot exist as an occasional experience; it has to become prioritized and normalized. The Sacred We has to be occasioned by a ‘significant minority’ within ‘significant intervals of time’ and ‘in person’. This I am sure of.

Because I am sure of this, I am working on ways to make it a reality. My team and I are building the systems and infrastructure, distribution channels and physical locations to fortify and expand communities committed to embracing the practices and integrity necessary to live from the next stage of human evolution. It will take a movement to unleash the love and liberation needed to usher in this brave new world. This is a massive project. We need hearts on fire, feet on the ground, hands in action, all sharing the same vision, if it is to succeed. Who can I count amongst the revolutionaries that share this vision? Do you have a sense of destiny? In what way can you show up?