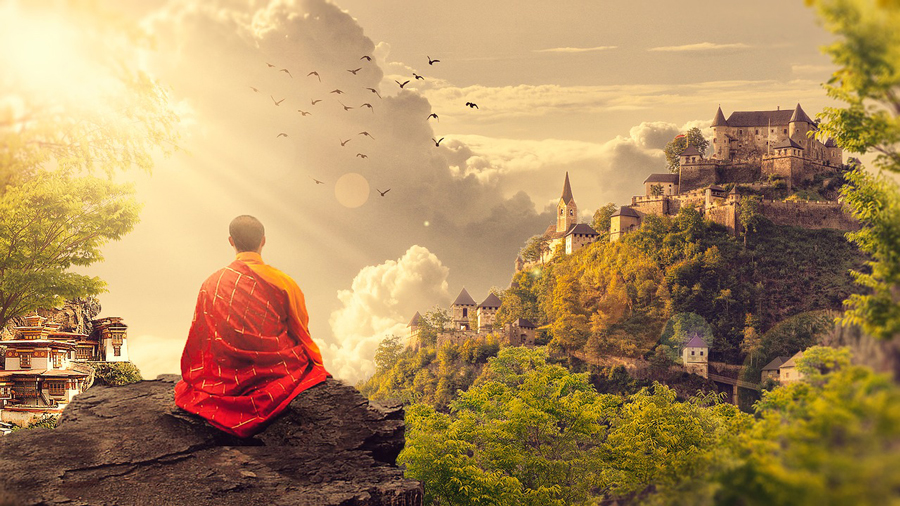 Taoism originated in China some 2,000 years ago. Its originator remains unknown although Zhang Daoling became the founder of the first organized Taoist school of thought. Taoism was one of the most followed religions in China until the communist revolution banned it a few decades ago reducing it to a fraction of its original glory.

According to Taoist philosophy, ‘The Tao’—translated as ‘the Way’—is the essence of all that is. The Tao is the underlying principle and unity of everything. It is the creative principle of the universe that unites all opposites. The Tao is not a substance or a thing but the essence of all substances and all things. It is the source of all creation and the creative act itself. It is beyond words and concepts and therefore cannot be adequately expressed by language alone. The Taoists sought to align their lives with this ultimate essence; the goal was to develop one’s life to be in alignment and harmony with the primordial energetic source of all that is…the Tao.

Taoist internal alchemy methods included the energetic-based healing and personal growth traditions, ‘Chi Gong’ and ‘Tai Chi’, as well as a variety of breathing exercises, meditation/concentration techniques, and practices that sought to retain and sublimate sexual energy (also common among yoga philosophies). All of the Taoist ‘internal alchemy’ approaches were designed to gather, store or circulate the secret and sacred energies of the human body.

One of the most important of Taoist energy mobilization and cultivation practices was known as the ‘microcosmic orbit’. The microcosmic orbit involves a number of different meditation techniques and breathing exercises designed to circulate energy up and into the head and then back down the body through chi energy centers. The origins of the microcosmic orbit date far back, at least 3,000-4,000 years. Elements of it can even be found in the 3,000-year-old famous Chinese book of changes, the “I Ching”. In learning the microcosmic orbit the student is encouraged to develop deep abdominal breathing into the primary Dantian (energy center that’s approximate in location to the SCM codes (sequence and protocol) lower contact point) to develop heat and pressure in the lower abdomen, called the “Golden Stove”. This breathing and focus on the lower Dantian produces heat energy that stimulates the release of the sacred energy harbored within the energy center, which can then be directed to the head and circulated through the body.

My belief is that the energy produced in the form of heat and pressure focused into the primary Dantian—referred to in Taoist sacred texts—created a generalized dispersion of energy in this region, which partially activated the contact point that’s more precisely accessed in the SCM code. These energy-cultivating geniuses provided a base that Source Code Meditation has been able to enhance with more consistency and specificity as well as provide an application in 21st-century life for its effects.

Taoism identified another key area relating to the mobilization of sacred energy and called this spot the ‘jade pillow’ (also known as the ‘upper gate’). This jade pillow contact point was known to be very hard to access and open and was also referred to as ‘the iron wall’. The jade pillow was thought to control the rising of energy from the spine into the brain. Of note is that this point is almost identical to the upper contact point in the SCM code and through the precision of our technique and protocol this upper gate is very easy to engage thus opening the secret door in the ‘iron wall’ and mobilizing energy to the brain.

To open the jade pillow point, Taoist masters taught their students various exercises, ‘meditations on the upper gate’ and various neck postures and movements. Again, these were generalized approaches that approximated a specific energy center and sometimes created enough access to mobilize latent energy. It appears as though some of the masters were onto more sophisticated approaches as described in ancient Chinese texts, where three fingers were held into the jade pillow and observable breath changes seen and feelings of inspiration flowed into the recipient.

Somewhere along the line development stopped and these beautiful lost arts and their science of transformation never evolved enough to create widespread transformative change in the modern masses.

Consistent with most of the pre-modern approaches to activating sacred energy, the techniques used by Taoist masters to mobilize energy were often non-specific. Such as breathing and focusing in the area of the lower Dantian to increase heat and pressure, or neck movements to open the upper gate. I believe these techniques create a non-specific contact into the same area that the SCM code accesses with precision. As we will see in my next journal entry the Yogis of India found ways to ‘force the energy up’ through non-specific techniques and this often led to an overload of energy that the body and brain of the recipient were not prepared to metabolize. We seem to have two phenomena showing up in both Taoist and Yoga traditions. Either the energy releases in a gentle and subtle way with limited transformative effects or it releases in a fury occasionally leading to transformative effects but often simply overloading the capacity of the body and brain to metabolize its surge.

Again, based on the consistent and repeatable results we see through the Source Code Meditation protocols, I believe there is a higher degree of specificity of contact into the energy centers AND an evolutionary upgrade occurring within this sacred energy and/or pathways and the brain. This evolutionary upgrade coupled with the precision of the SCM protocol may explain the high degree of consistency and reproducibility of the mobilization and assimilation of energy seen with Source Code Meditation.

This journal entry was not meant to be a detailed study of Taoist techniques nor philosophy, but instead designed to bring attention to the historical significance that these geniuses provided for the eventual development of the Source Code Meditation approach. I am also not being critical of the non-specific approaches, contacts or inconsistent outcomes. This is simply how evolution works; these ancient practices provided thousands of years of experimentation, hypothesis and knowledge that led to the breakthroughs of the Source Code Meditation technologies.